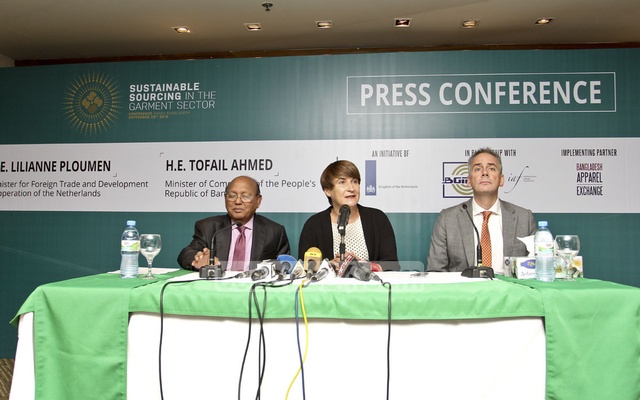 The visiting Dutch minister for foreign trade and development cooperation has said that Bangladesh is taking “accurate” measures to ensure security after the July 1 terrorist attack.

“I think the government is doing its utmost to make sure security of the citizens,” Lilianne Ploumen said at a press briefing on Thursday after the opening of a conference on ‘Sustainable Sourcing in the Garment Sector (SSGS)’.

Flanked by Commerce Minister Tofail Ahmed at the briefing, Ploumen said they were 'very shocked' by the terror attack on an upscale cafe in Gulshan, which left 22 people killed.

“But it’s a global problem. Even within Europe we are also concerned about terrorist threats,” she said, stressing on collective efforts to combat terrorism.

“It's not one country by itself that can combat terrorism, it’s a joint effort and Bangladesh is working with the international partners,” she said.

Ploumen arrived Dhaka on Wednesday, in her fourth visit after the 2013 Rana Plaza, to attend the conference that the Netherlands embassy organised at a Dhaka hotel.

The apparel industry is the backbone of Bangladesh’s exports, accounting almost 80 percent of the earnings.

The Netherlands, which is one of the leading buyers of Bangladeshi clothes in Europe, says they want to support the industry to grow in a responsible manner.

“Sourcing practices are not always appropriate. Unreasonably short lead times, lack of mutual trust and transparency, or an exclusive focus on the lowest price easily result in excessive working hours or cutting corners with environmental standards.
“That is why the conference on Sustainable Sourcing in the Garment Sector is being organized in partnership with the International Apparel Federation (IAF) and the BGMEA,” the embassy earlier said in a statement.

The visiting minister in her speech at the inauguration of the conference acknowledged the progress of ensuring factory safety and workers rights after the Rana Plaza disaster, but said still more needed to be done.

She insisted increasing workers’ wages further to make it a 'living wage'.

New problems were now emerging as everyone wants corporate social responsibility, but that calls for considerable investment, according to the Dutch minister.

Bangladesh Commerce Minister Tofail Ahmed urged buyers to increase the price of the products they buy from Bangladesh.

He said factories needed to invest in ensuring safety and rights of the workers including increasing salaries, but the buyers are not raising the prices of those products.

The aim of the conference was to address the issues of fair pricing jointly with the producers and buyers, the visiting minister said.

“Your interests do not conflict. Use this conference as a springboard for more partnership and dialogue,” she called upon them.

“Everyone will benefit: the producer, worker, buyer and the consumer. Sustainable sourcing is the right way forward,” she said.